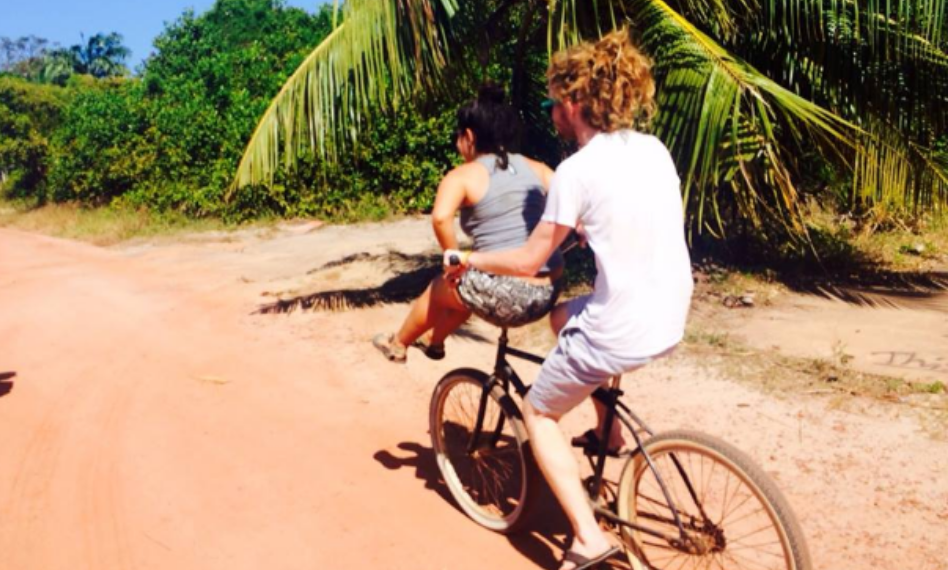 I had never met anyone like him and felt a sense of peace and gratitude that we would be community mates for the next two years. I exhaled in relief; Johnny brought the color and joy that is necessary, especially in the face of suffering.

I would come home and Johnny and another community mate would be jamming out on ukuleles. Their desire to sing out loud even after long days got me out of my room to join them in the living room. Johnny would encourage me to sing, even if I didn’t know the song. Fast forward ten minutes and we were having a dance party.

Johnny experimented in the kitchen, never knowing what makes a meal “whole,” he would serve up peanut butter pasta. Though we’d start to eat his food hesitantly, we always laughed at him and encouraged his adventurous and curious mind and spirit.

When the days got tough, we’d all sit in our prayer room, sweating and sharing, and asking all the questions. Always seeking.

Johnny and I became adventure buds. These were our moments to remember to live out joy. Johnny would ask, “who wants to hitchhike with me down to Punta Gorda?” I’d obviously join him, the same way he’d join me out on escapades to find the ocean on the Keyes. We found ourselves climbing trees over rivers just to watch the fish. We found ourselves sharing jars of peanut butter as we camped in the jungle. We sang in the back of fada’s truck. We walked through flooded streets together. We shared ice cream on the verandah. These were some of the best ways I prayed as a JV.

We never dated in JVC, though we both knew we loved each other at each other’s core. Once I was back in the states and Johnny was still working in Belize we knew our love was expanding.

Now we find ourselves married, still seeking and still living out joy. JVC shaped our foundation as a couple, a foundation of intentionality and purpose. Not only as a couple but as individual humans. JVC showed us how to care for each other more in radical ways, in more soulful ways. Together, we still ask the questions. How can we live in this world that is always demanding so much of us with a sense of abundance rather than depletion? How do we exist in a community with a sense of all of us belonging to each other? How do we encourage each other to move through the world while sharing our gifts, and seeking more truths? How do we push each other to keep embodying a youthful, adventurous and free spirit? We ask these every day in the kitchen, while Johnny tries to wash the dishes like Tich Naht Hahn would ask him to. While I sing and dance holding our puppy. While we open the window to wave to our neighbors. While we share about our work, whether in frustration or in hope. While we hold each other in it all.

In 2019, Johnny and I got engaged and celebrated our love “adventure buddy” style and set out on a bike trip, traveling the Sierra Cascade mountains and then from Canada to Mexico on bicycles. We got married twice in 2020. Once in a small, intimate ceremony in my backyard which ended up becoming a pool party. We got married again in November in the Catholic Church alongside our community of friends and family.

Carolina and Johnny served in Belize City from 2013-2015. They now live in St. Lois, MO with their recently adopted pup, Louie.