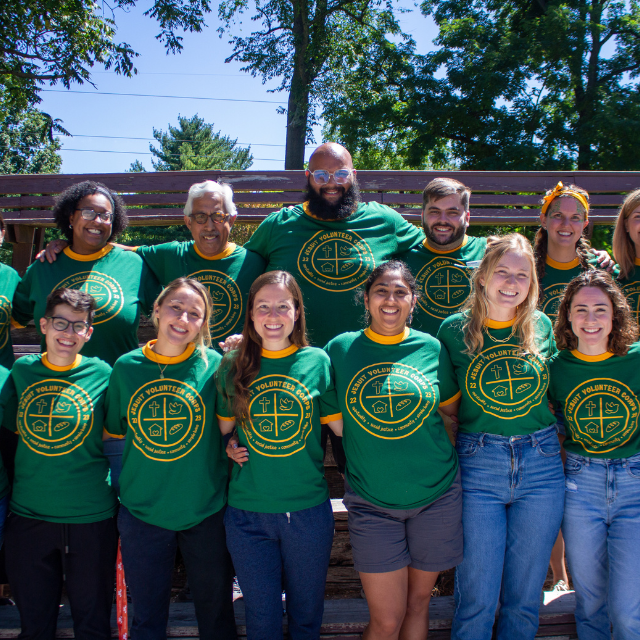 JVC staff works tirelessly to create a just, inclusive, and equitable world that honors the dinity and diversity of all. Whether supporting our volunteers on the ground, fundraising to keep agency costs as low as possible, or recruiting the next generation of young leaders, our staff keeps JVC’s core values of spirituality, community, simple living, and social justice at the forefront of our work.

Jesuit Volunteer Corps is closely monitoring the spread of COVID-19. Please check the JVC News section of our website for information on our latest precautionary measures we have taken as an organization. As of March 16, all JVC staff is working remotely, we apologize for any delays in communication at this time.

As president, Tom is responsible for setting and implementing the goals and direction of the organization. He is a longtime fan of JVC, with plenty of friends and family having served as Jesuit Volunteers. He and his wife Carolyn are proud former support people for the Santa Monica house in the 1980's.

Anissa is responsible for managing the human resources department including benefits administration, staff recruiting, payroll and policies. Previously, Anissa worked within a large Christian school and appreciates the value of service focused missions. After setting the intention of finding a new way to work towards creating a world of goodness, Anissa found JVC!

Director of Finance and Administration

Brian is focused on keeping internal processes running smoothly and effectively. Following his year as a JV in Sacramento, CA (2002-03), Brian worked in the engineering field before transitioning careers to nonprofit management. He worked for a few Boston-area nonprofit organizations in similar roles before joining the JVC.

With 20 years of fundraising experience, Karen oversees the fundraising efforts at JVC including donor cultivation, annual appeals, grant preparation, and the Send Me to Serve campaign. As a former employee of a nonprofit who had Jesuit Volunteers, Karen knows the value and capacity building impact of the JVC experience for our partner agencies.

Laura is responsible for providing strategic and operational oversight for the formation and service program. She served two years as a JV during the 2008-2010 program years. In her first year, Laura served at Sarah House, a hospital hospitality house in Syracuse, NY followed by her additional year with San Diego Youth Services in San Diego, CA.

Rob is responsible for providing strategic oversight of recruitment efforts for prospective JVs. With the Jesuit Volunteer Philippines Foundation and a Jesuit education, Rob worked for one year with rural sustenance farmers in Tacloban, Philippines to support and develop an innovative, sustainable, and cooperative agribusiness model. Now, he looks forward to guiding and supporting other young leaders committed to seeing their faith in action.

Shivany serves as the Director of Admissions at JVC, helping prospective volunteers and agencies navigate the admissions process from completing the application to an agency being matched with a Jesuit Volunteer. Prior to joining JVC, Shivany worked in Higher Education, specifically Housing and Residence Life. Shivany is a graduate of Saint Louis University with a B.A. in Urban Affairs and Political Science. She also holds a Master of Public Administration degree from Southern Illinois University Carbondale, with a concentration in Non-profit Management. Outside of work, Shivany spends most of her time with her husband and daughter. In her free time, Shivany enjoys crafting and sewing, reading, travelling, and listening to podcasts.

Wendell is responsible for managing the financial activities of JVC and making sure that we effectively and efficiently serve all our constituencies – staff, agencies, volunteers, and supporters.

Bri is responsible for general finance tasks, such as accounts payable, accounts receivable, general accounting support, and troubleshooting for volunteer and staff financial questions and concerns. She is proud to be a part of an organization with such a powerful and meaningful mission.

Maggie is responsible for various finance tasks including but not limited to accounts payable, accounts receivable, and handling general finance questions and concerns for volunteers and/ or staff. She aligns with the work JVC does in underserved communities and is proud to contribute to the organization’s mission. Outside of work, she enjoys reading creative nonfiction essays and literary fiction, writing poetic prose, and playing Sonic video games with her son.

Kevin is responsible for developing appeals to individuals and cultivating new donors, while also serving as the main point of contact for supporters. Kevin served two AmeriCorps terms, in Sacramento and Baltimore, before moving into the fundraising field, where he worked for a few arts and education-based organizations before joining JVC in 2021.

Carter is responsible for supporting our community of Former Jesuit Volunteers (FJVs), building relationships and developing partnerships to provide ongoing resources to alumni of the program. In 2017-18, Carter served as a JV in San Diego at Academy of Our Lady of Peace, working on their campus ministry team.

Anna is the Recruitment Manager and is responsible for recruitment efforts in the central region, based out of Cleveland, OH. She served as a JV in 2018-19 with Urban Neighborhood Initiatives in Detroit, MI. She loves hearing about the values and experiences that draw young people to JVC and accompanying them in their discernment process!

Courtney graduated from Fordham University Lincoln Center in NYC with a B.S in Psychology in 2017 and served as JV in Nashville 2017-2018 at Room in the Inn, a center for individuals experiencing homelessness​​. Later Courtney attended Fordham Graduate School of Social Service after JVC and graduated with a Masters of Social Work in May 2020​.

Abby is responsible for recruitment efforts in the western region, and based out of San Diego, CA. She is a former Jesuit Volunteer, who served in East Los Angeles as a Career Counselor at Homeboy Industries in 2021-22. She enjoys running, creative expression, and accompanying potential JVs as they discern a meaningful and transformative year of service.

As an Admissions Manager, Chris supports the screening and placement process for all incoming Jesuit Volunteers and agencies. He is also responsible for providing formational support to the volunteers placed in Baltimore and Washington, D.C. Chris served in a similar program to JVC, Dominican Volunteers USA for two years prior to joining on JVC staff. In his first year, he served at Heartland Alliance, a refugee resettlement agency in Chicago, IL, teaching English to newly arrived refugees. In his second year, he served in Catholic Charities Atlanta Refugee Resettlement as an employment specialist.

Pam supports the JVs who simultaneously take part in AmeriCorps from enrollment through exit. She also assists with the Board of Directors and provides miscellaneous support for the Program Team's operations. Not a former Jesuit Volunteer herself, she does have FJV envy.

Brooke is responsible for contributing to the formation, support and overall experience of the International Program. She previously served as a volunteer with Rostro de Cristo in Guayaquil, Ecuador from 2016-2017. Brooke has been on JVC Staff for two years and lives in San Diego, CA, where she also serves as a part-time Resident Minister at her alma mater, the University of San Diego.

Since joining JVC in 2018, William has worked with volunteers who served internationally as well as those serving in the Eastern United States. Having volunteered and worked in many JVC-esque roles, from international non-profits to public schools in the U.S., William draws from such experiences in offering perspective and fostering growth among Jesuit Volunteers and the stakeholders that surround them.

As an Area Manager for the East region, Kate supports JVs in Philadelphia, Brooklyn, Harlem, and Portland. She accompanies JVs as they explore and deepen their commitments to the values of simple living, community, spirituality, and social justice. Kate served as a JV in Philadelphia in 2016-2017.

Ashley is the Area Manager for the South and oversees the communities in New Orleans, Houston, Austin, San Antonio, and Albuquerque. While based in New Orleans, she accompanies volunteers on their JV journey and offers support through relationship building, retreat facilitation, and agency connection. As a 2014-2015 JV in Harlem, Ashley served at St. Ignatius School in the Bronx.

Ben works to accompany volunteers through their transformative year by providing program content specific to their cities and working with the Agency Partners there. Ben has been with JVC since 2015, previously working with D.A. Blodgett - St. John's Home, a residential treatment campus, in Grand Rapids, MI. Ben is based out of Detroit, MI.

As an Area Manager in the West, Gabby accompanies JVs in San Francisco, Berkeley/Oakland, Sacramento, and San Jose/Santa Clara as they live out JVC's core values in their service, retreats, and communal lives. Gabby served as a JV from 2014-2016 with JVC Northwest. Her first year was in Tacoma, WA at Nativity House and her second in Seattle, WA at Recovery Cafe.

The Jesuit Volunteer Corps is governed by a board of directors deeply committed to the mission, values, sustainability, and impact of JVC.  Every member of the board has had their life positively affected by JVC, whether through their own service or the service of friends and family.  Board members bring a wealth of experience as leaders in the corporate, non-profit, and Jesuit worlds that shapes their support of JVC’s mission.