Misconceptions about “playing poor” on a volunteer stipend 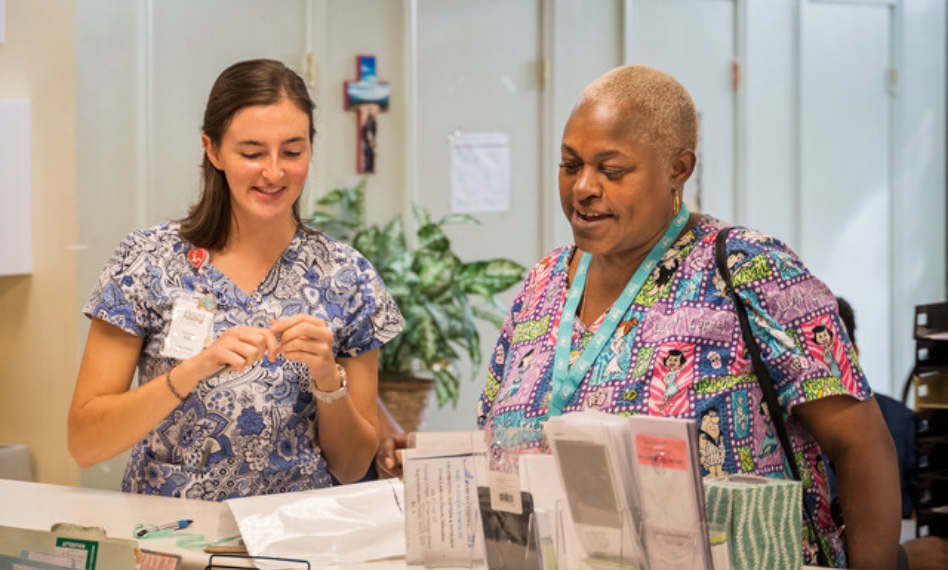 “Aren’t you just playing poor?” This idea was embedded in one of my final application questions for JVC. The prompt was, “How would you respond if asked this as a Jesuit Volunteer?” “Playing poor” seems to minimize the challenges of poverty and dilute simple living into a show, where I “play” a certain part. Articulating the difference between intentional simple living and “playing poor” as a yearlong volunteer proved incredibly challenging.

I first identified the difference as selfishness, then attentive mindfulness, but neither answer felt complete. My inability to articulate the distinction frustrated me. I’m not pretending to mimic the complex facets of poverty by briefly committing to a stipend. Rather, JVC fosters a spirit of detachment, not casting volunteers into the role of “poor person” in a year-long performance.

In the following days, I prayed about worldly attachments, simple living, closeness to Christ, and the struggle of making authentic choices. After prayer, more pieces of the puzzle fell into place, yet I still hadn’t put it all together.

During this time, I read a book about the progression of social justice in the Latin American Catholic Church called When the Gospel Grows Feet, by Thomas Kelly. Dr. Kelly argued that the Catholic social teaching of the preferential option for the poor is fully realized in the incarnation of Christ—the descent of the Son of God from heaven to earth.

He explained, “When persons, in whatever form they are able, leave power, security, contentment, happiness, and relative fulfillment to enter into the pain and suffering of the world’s vulnerable in order to love and humanize them, they imitate the action of Christ in the incarnation.” (WTGGF, pg. 95) I’m not volunteering full-time for the applause but rather for what happens behind the scenes. By choosing JVC, I’m not only trying to emulate Christ’s intentional choices to engage our messy humanity and to prioritize the poor but also to learn how to humbly, albeit imperfectly, reflect His perfect love in my own daily acts, as we are all called to do.

Moreover, by living in solidarity, I’m not simply getting into character but starting to examine the implications of my daily decisions and to ask sometimes-unsettling questions. Why are there more immigration law offices on the south side of Milwaukee than the north side? Why do so few people who look like me ride the bus? Solidarity is more than just working with or living near marginalized populations. It’s a daily choice to embrace our tough reality, yet within it, to encounter, befriend, and love Jesus. I try to do this daily with my patients at my placement site (Bread of Healing Clinic in Milwaukee, WI) and with peers.

After lengthy reflection on this topic, if someone asked me: “Aren’t you just playing poor?” for choosing to live simply on a stipend, I would respond with the following –

“No, I’m living a simple lifestyle that’s out of my comfort zone, so I can distance myself from worldly attachments and comforts in order to live out a more authentic Catholic faith, grow closer to God, and better serve His most beloved By choosing to stand in the margins, through countercultural actions on earth, I reflect Christ alive in our lives.”

I attempt to reflect such selfless love when I encounter my patients. Sometimes, it’s the simple presence of sitting with a patient as she cries or the blanket of relief that covers a patient’s face when I speak in broken Spanish; however, true encounters are always mutual. As Fr. Greg Boyle, SJ would challenge in these instances, “Who is the service provider, and who is the service recipient?” It’s those moments of mutuality where Christ is most alive in our lives.

I work to embrace the reciprocity. I have much to learn in the coming months. Besides, the fruits of this experience aren’t confined to one year. The encore is still to come.

Courtney Child is a recent graduate of Creighton University's College of Nursing, originally from Olathe, KS. She loves to read, run, and drink coffee and tea. She will serve as a registered nurse at Bread of Healing Clinic in Milwaukee, WI. Courtney just finished her first marathon in May!