One of 1.5M Faithful During Pope Francis' Trip to Peru 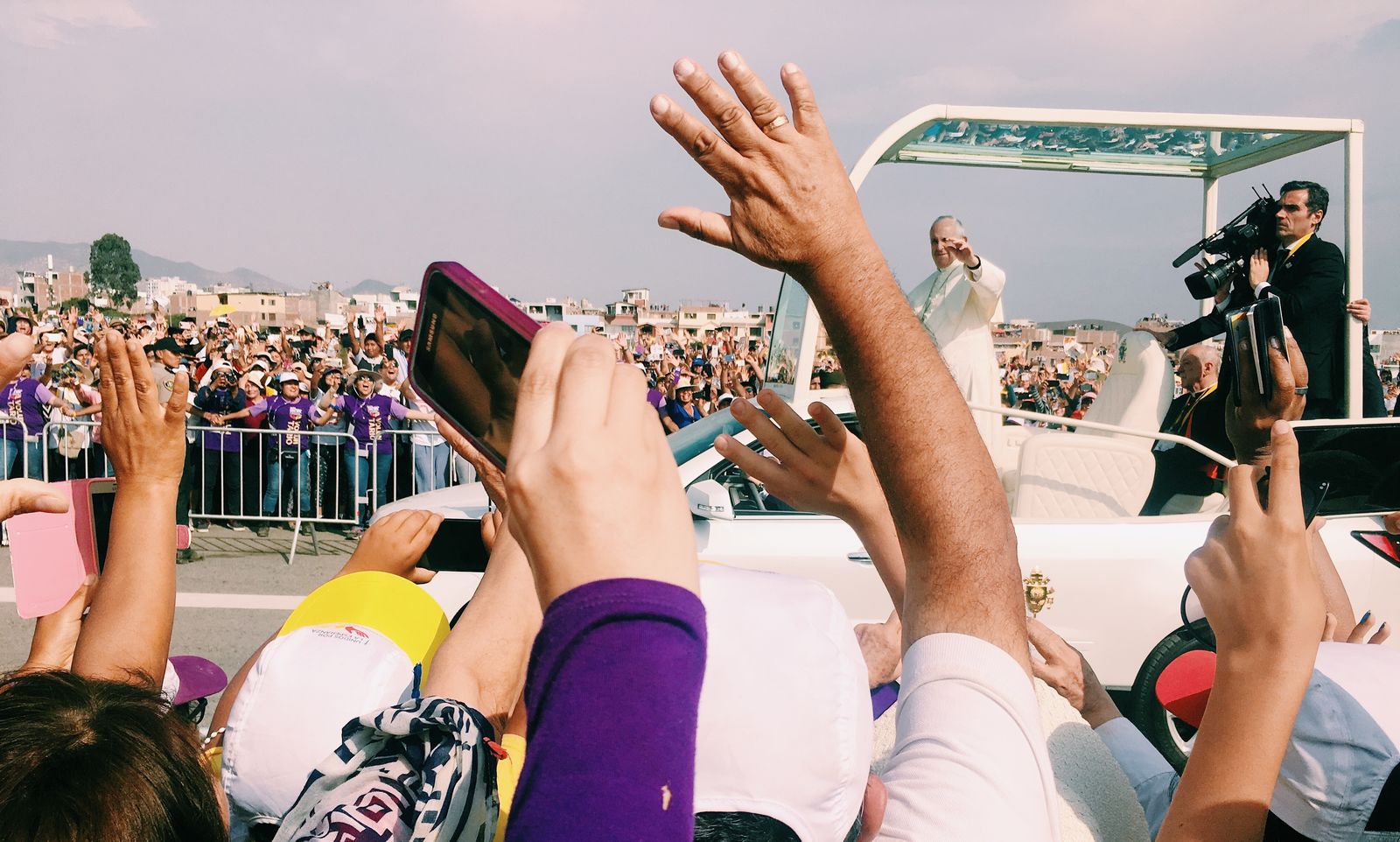 Hermana Yoli, a sister of St. Joseph, bolts downstairs eagerly telling us Papa Francisco has landed in Lima. With two-dozen little neighbors in tow, we cram together on the floor of the Hermana’s TV room. With emotion, we chant in unison “Papa! Papa! Papa!” I see a few tears falling from the adult eyes and I begin to ask myself: What does this visit mean to me?

I try to comprehend how this Papal visit comes as an antidote to disunion. It comes as a message of unity and hope for the young, the poor, the elderly, the incarcerated, the mine workers, the bus drivers, the Sisters of St. Joseph, the nonreligious, the JVs and Peru Jesuit province alike.

Two days later, I am one of the 1.5 million faithful. We’re loud, sunbaked, drenched from firefighter hoses and roaring as Papa Francisco swoops past us in his Papa Mobile. The hoopla quickly calms for the Pope’s last celebration in Peru. The Papal visit’s theme Unified for Hope and his final comments emphasize the plight of the young and the poor and condemn a corrupt politics that have rocked Latin American nations. However, he ultimately unifies us in hope: 1.5 million people stopping in their tracks in a city mired with an “indifference that makes us anonymous and deaf toward others” to simply sit with one another and think about how we want to create the Kingdom of God now, in Peru.

During mass, we listen to readings on converting a dirty, grimy city of Nineveh. It reminds me of gritty Lima or marginalized Tacna, and the Gospel about being sent to be fishers of people. “They are found along our roadsides, living on the fringes of our cities, and lacking the conditions needed for a dignified existence,” Francisco reflects in his homily, “It is painful to realize that among these ‘urban remnants’ all too often we see the faces of children and adolescents. We look at the face of the future.”

Papa Francisco’s message resonates for me as I live alongside the Sisters from the Congregation of St. Joseph and accompany the “faces of the future”—teaching English and working on teamwork skills through multiplication bingo and puzzles—on the fringes of Lima, Peru.

We cannot know what happens to “the face of the future” until we too respond to that knock on our door. And while I cannot answer with a quick solution to every problem my neighbors face, I can react with a listening ear.

The days following Papa Francisco’s visit, and his reflection on the city of Nineveh, I feel ready to respond to those knocks. But as time passes I find myself having a harder time staying close to my present vocation: How can I accompany one when maybe I need the accompaniment? How can I be a messenger of hope when I too need hope? How can I be love? I must not see my neighbors and the kids chanting in the TV room as simply “the faces of the future,” but pay attention to them as faces of the now. My work is to have a genuine human response to my neighbors as Papa Francisco showed Peru.